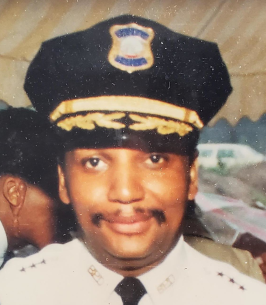 William “Billy” R. Celester Jr. was born in Boston to Edith and William Celester, Sr on March 9, 1943; he arrived 5 minutes before his identical womb mate, Larry (Lawrence); passed away on February 21, 2022. He was 78 years old.

The twins and an elder sister Joyce (Kelly) grew up in Lower Roxbury near Madison Park, off of Sterling, Ruggles, and Tremont Streets. In the ensuing years, Billy became a Boy Scout, was a Marseille Dukes, did a stint in the military, entered the trades, married, and became a father to his first son Kevin, 62. His second marriage to lifelong partner, Maggie Lee, produced three children; William III 56, Sonya and Eileen, (both deceased).
Billy’s mother often recounted him telling her at the age of three that he wanted to grow up to become a motorcycle officer. When opportunity knocked he answered and became one of only four blacks in his class at the academy.

Billy rose through the ranks from Patrol Officer, Detective, became Commissioner of Suffolk County House of Corrections at Deer Island, returned to the BPD as Deputy Superintendent, Superintendent of Area B, and was recruited to become Director of Newark, New Jersey Police in 1991. He was one of the founders of the union for African American Corrections & Law Enforcement professionals, MAAP (Massachusetts a Afro American Police) which later became MAMLEO.

The family of William R. Celester Jr. will be gathering on Monday morning March 7 at 10:00 O’clock at Riley-Antoine Funeral Home, 171 Humboldt Ave. in Dorchester to line up in procession for the burial at Oak Lawn Cemetery, 427 Cummins Hwy in Roslindale.