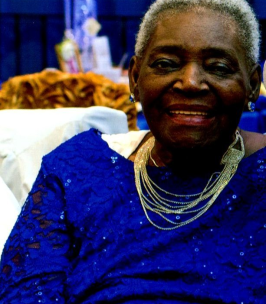 Queen Vivian Eleanor “Nanny’ Schofield was born August 13, 1932 in Tewksbury, MA. She was the eldest of four born to the late Rebecca Thomas and David Edward Johnson from Savanah, GA.

She graduated from the Boston Public School system and went on to work within the service industry which included a job as elevator operator at Jordan Marsh Stores. Her great personality, sense of humor and winning smile captured the hearts of many with whom she formed lifetime relationships.

On April 12, 1950 she married the late Louis Schofield and from this union the Schofield legacy began starting with the first born, the late Diane Vivian Schofield. Queen Vivian gave birth to seven more children: James, Everett, Donna, Steven, the twins Michael, and Dana and of course the baby Kim.

Our beloved Vivian had a profound love for music and was blessed with a golden voice which led her to astounding opportunities as a professional songstress. Her singing career began as a young girl at the Metropolitan Baptist Church. Later, during her adult life Vivian’s electrifying and powerful voice established her as a well-known lead singer at some of the most prestigious Clubs in the Boston, Rhode Island, and New York areas. At the peak of her singing career, she met renowned songstress Diana Washington who offered Vivian the opportunity to travel with her to California to excel in her stardom potential and become a Hollywood singer. Albeit Vivian’s entertainment dreams were at her fingertips, she choose to stay in Boston and pursue the dreams of her heart which was to begin a family with her husband Louis.

Vivian’s creative abilities didn’t stop at singing, she developed a passion for knitting that brought her much joy as it became one of her most favorite hobbies. She knitted mainly scarves, sometimes blankets and would gift them as tokens of love to the people she held dear, even all of the medical staff she encountered at appointments or physical rehabilitation facilities. If she knew you were going to a store where her goods were sold, trust and believe she would always say “Don’t forget to pick up my yarn!”

Our Beloved Vivian was a woman filled with the Holy Ghost and had an endless love for God, She joined the Holy Tabernacle Church in 1980 under the leadership of the late Bishop Dr. Joe L. Smith and maintained her membership until her passing. She made sure to bring her children and their offspring to church as well. She was ‘Nanny’ to all of her grandchildren, great grands and great, great, grands and all of their friends and spouses.

The love for her family will always be adored and warmly embraced, the sound of her laughter, her quick witted commentary, and poised ability to tell it exactly how it is will live within us for the rest of our lifetimes. Vivian was blessed to see five generations of her rich legacy on whom she was able lavish much love during her time on earth.