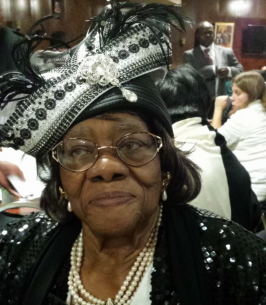 Sophie Mae (who called herself Sophia) was born on April 18, 1928, to the late Frank Will “Daddy Frank” and Katie Mae “Mah” Ellis/Hollins in the small town of Gum Ridge in Shaw, Mississippi. She was the oldest child born to this union. Sophie departed this life on November 2, 2022.

Sophie was educated in Mississippi as a child. She was the second oldest child of her siblings; Lurlene (deceased), Eddie, (deceased), Freddie (deceased), Charlie (deceased), Mildred of Rhode Island and Milton (deceased). As children they were sharecroppers where they spent most of their lives on different plantations picking cotton, from Bolivar County in Cary, Mississippi to Dorkey, Mississippi on to Cleveland Mississippi. Three months out of the year, she and her siblings were allowed to attend school. Sophie’s education extended to the eighth grade level.

At the age of 5, Sophie began singing around the house and her brothers would join her.. Noticing their gifts and many talents, their Mother worked with them on their harmonizing skills and formed a group calling them the Hollins children. They sang in local churches where they were lauded as a very talented group of singing children. As they grew older, their name was changed to the Spiritual 5, where Sophie was the lead singer. While traveling throughout Mississippi, they also sang on several radio stations. Their fame grew so, that they were invited to Louisiana to sing for a group of Caucasian people in a large Auditorium there. The people there were so thrilled with their singing talent, that they threw bills and coins on stage for them. Those funds helped clothe and feed the family for a while.

Growing up as a child, Sophie had a tender heart towards the Lord and gave Him her life at Mt. Carmel Baptist Church, lead by Reverend H. S. Moore, where she accepted Jesus as her Lord and Savior and joined the choir. At the young age of 18 years old, she met and married the late Alquin Owens, in Estill, Mississippi. Her love for God did not stop. She attended church there and even joined their choir. While in Estill, she birthed 7 children; David, Katie, Frank, Alquin - deceased, Shirley, William and Virginia. Moving to Cleveland, Mississippi where her husband had better work opportunities, Sophie delivered her 8th child Eddie. Once in Cleveland, Sophie joined the Church of God and Christ and continued to sing in the choir.

In 1957, while Sophie was still a young woman, her husband wanted a better life for his family, so he went to Boston, Massachusetts after hearing about the work possibilities there from his Brother-in-laws. He went and found work and then sent for his family to join him. After arriving in Massachusetts, Sophie and her family attached themselves to Little Zion Church of God and Christ, under the leadership of Elder James Darby. In Massachusetts, they welcomed 5 more children, Diane, Charles, Sybil, Connie and Annette to their family.

She was a dedicated member of the Little Zion Church of God in Christ until she moved her membership to Morning Star Holiness Church, under the leadership of her late brother, Bishop Eddie Hollins. Sophie was an avid singer. She sang on church programs and was well known in the Boston area. She was a very sharp dresser and had a hat collection out of this world. From there she moved her membership to Mount Pleasant Holiness Church and was consecrated Mother of the Church under her late Pastor, Bishop Charlie Hollins. Sophie then moved her membership to A New Day Holiness Church with her present Pastor, Elder Troy Smith, retaining her title as Mother of the Church. Throughout her service and tenure at each church, she served in various roles, to include fund-raising, using her culinary skills to being a mentor for many young and old. She attended service faithfully until she became home-bound. Not only was Sophie faithful in serving her Lord and Savior, Sophie was a very hard worker in life. Even as a child, she was the sibling that cooked and cleaned for the entire family as they worked in the fields. Her first job experience outside the home and field was at the Framingham Rag Factory. As a worker there, she was able to purchase bags of clothes at 5 cents a pound for her children. From there she worked at Crown Linen Co. washing and folding sheets.

Sophie didn’t realize it, but she was a self-made entrepreneur. Between jobs she cooked and sold Cakes and Sweet Potato Pies to people in the church and communities. She also helped her late Brother Freddie Hollins in his bakery when she wasn’t working for the Highland Rest Home. Her tenure for the Highland Rest Home lasted thirty years. During those years, Sophie lead a strike with 29 other workers, vying for a pay raise of $2.00 and a pension plan for her retirement years.

But our citizenship is in heaven, and from it we await a Savior, the Lord Jesus Christ, who will transform our lowly body that it may be conformed to be like His glorious body, according to the working by which He is able to subdue all things to Himself.
Philippians 3:20-21 (NKJV)