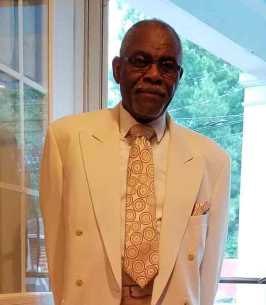 Reuben Leonard Lindsey was born on January 29, 1949, to the late George Washington Lindsey Sr. and Jessie Lee Coats-Lindsey in Gadsden, Alabama. He was twinborn and affectionately known as baby boy as he was the last of eight children. Reuben was a humble quiet giant, raised as a member of Friendship Baptist Church in Gadsden, Alabama, under the leadership of Pastor W.J. Davis where he accepted the Lord at an early age and was baptized. He worked in various capacities of the church but his love for singing landed him in the youth choir. From there he and a few young friends formed a singing group known as Bill Avery and The Love Company and they later went on to land a recording deal right there in Gadsden, Alabama.

He was known to have the crowd up on their feet while he was working the bass drum and twirling the sticks.
The performer that he was. All during his Junior and Senior year of High School he worked at Getter & Adams
Funeral home and later transitioned to Watson Funeral home. It was there he developed his passion for
Mortuary Science.

Upon completion of High School Rueben relocated to Boston MA. in 1967. Two years later his whole life
changed in 1969 when he met the true love of his life, Katie M. Owens. In 1970 he received his Associates in Science and Funeral Services from the New England Institute of Anatomy Sanitary Science, Embalming and Funeral Directing. From there he became Manager of several food service chains such as Freedom Foods and Purity Supreme.

In 1974, Reuben and Katie were united in Holy Matrimony before God and their family. This union brought
three children, Grayson, Maliaka and Darcie. In 1977 he attended the New York State College of Agriculture
and Life Sciences at Cornell University where he received his certification in Managing & Training, and
Effective Communication. During this time, he also worked nights at Friedman Bakery. In the 1980’s he was
the manager of Kim’s Kaps Carrolls where he spent several years in Retail Management while still working for
Funeral Homes: Lee Barrett’s Funeral Home, Roger Shields Funeral Home and Riley-Antoine Funeral Home.

Elder Lindsey served on a District level as the Treasurer for the Metropolitan District for many years. A faithful
worker at State Temple COGIC in whatever he found his hands to do. He formed a Men’s Bible Study and was the president of the Male Chorus. Elder Lindsey was instrumental in formulating the Annual Pastoral
Anniversary Service with the sole purpose of honoring the Pastor. This was under both leaderships of the late
Bishop L.C. Young and presently Pastor Paul Odom.

He also diligently served on the ministerial staff and served Pastor Odom to the absolute best of his ability until the end. Even when sometimes he did not feel well in his body, that never deterred him from his task of serving and bringing order to wherever he was. In fact, his motto since learning of his illness was ‘I Won’t Complain.” Elder Lindsey’s hard work, his passion and the vitality of his spirit and tireless work ethics was truly reflected in everything he did. Hard work was unanimous with his name. Whatever the task or the job, Elder Lindsey gave 200%.