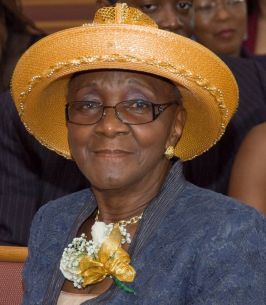 Monica Irene Greenaway affectionately known as Aunt-Irene was born on September 20, 1935, to Lazarus and Elizabeth Greenaway on the beautiful island of Montserrat, W.I. Irene was raised and spent her early years in St. Johns and later relocated Plymouth. It was in Plymouth that she met the love of her life, husband George Greenaway, and later got married on August 26,1961. They were married for 45+­ Years, and from that union came seven amazing children, one of whom is now deceased – Gloria B. Porter.

Irene was a dedicated wife and mother who spent most of her time caring for her husband and children. She loved to sew and would often make outfits for her girls to wear. She was a fashion designer, even back then. She was a true ‘Proverbs 31 Woman’, who was full of virtue and saw to the needs of her family and household.

Together George and Irene decided they wanted a better life for their children, so George migrated to the United States, and she later joined him in Boston, MA where they worked together to build a business. She believed that education was the key to success, so she pushed her children to do well in school and as a parent she would often volunteer with the Board of Education.

Throughout the years there were various struggles, but Irene maintained her commitment, connection, and love for the Lord. She was known as a prayer warrior along with her friends Sister White and Sister Nelly. She showed and taught her children the love of God. She also enjoyed travelling, and both she and her husband would jet off to places like the Bahamas, London, Israel, Africa and locally to the Cape. Together they traveled extensively, and later in life she traveled with her children. But there is no place like home, and her favorite place was always Montserrat.

God takes care of his own and provided Irene with great care. During her time of illness, she was blessed to have the gentle care of her children, family, friends, and caregivers. The last place she called home was in Jacksonville, Florida with her son and daughter-in-law Stephen and Vicky Greenaway. Their home will now be a little less bright because she is gone.

Take your rest now Mom, Grandma, Grannie. You will always be in our hearts, and we hope to see you on the other side. Until then our hearts will rejoice with the memories, laughter, wisdom and love you gave us.