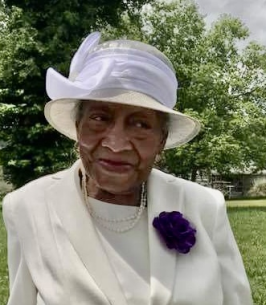 Marie Andre Willie was born in Memphis, Tennessee on January 9,1918, to the Reverend Andrew Morgan Washington and Hattie Lula Washington. She was reared in Helena, Arkansas; joined Carter Chapel A.M.E. Church; accepted Jesus Christ as her Lord and Savior; and was active in Sunday School, the choir and Allen Christian Endeavor League.

Marie graduated from Eliza Miller High School in Helena, and attended Philander Smith College in Little Rock, Arkansas, where she earned a Bachelor of Arts degree with a double major.

It was at Philander Smith, where she met and married George Alton Russell, Sr. To this union four children were born: Cathy Ann, Valetta Athené, George Alton Jr. and Wyatt Bruce.

The family moved to Boston, Massachusetts where George Senior attended law school. Marie immediately joined the historic Charles Street A.M.E. Church and became a member of the Etheridge Martin Missionary. Being an active contributor to the betterment of her community was something Marie deeply believed in. She became a member of the Celestial Chapter #60 E.S. Prince Hall (where she rose to the rank of Worthy Matron), a member of the daughters of Isis, Syrah Temple #31, and the local chapter of the NAACP.

While Marie had a varied career, which included working as an elementary school teacher, department store sales representative, a social worker; a manufacturing quality control specialist, her priority, focus and commitment were providing a good life for her children. She was a loving, nurturing mother, who made certain her children were clean, presentable, and well mannered. She always stressed the importance of getting a good education, which would open doors to greater opportunities.

As children, we have such fond memories of Mom. On Saturday evenings, after dinner, she would have us all congregate in the living room to eat Table Talk pies and watch the Saturday night TV program line up of Gun Smoke, Have Gun Will Travel, The Rifle Man, and Sea Hunt.

Most Sunday mornings mom would play gospel music and sing while getting us ready for Sunday School and church.

Wednesday nights, when she came home from work, were always special. She would treat us to our favorite foods of burgers and fries, with three flavored ice cream for dessert.

As adults, we would visit her home in Boston and later in Kannapolis and ask her to play the piano or organ. She would enthusiastically regale us with spirituals including Amazing Grace, and How Great Thou Art.

In 1991, at age 70, after 51 years of marriage, Marie’s husband, George went home to the Lord, after losing his battle with cancer.

After being a widow for 11 years, Marie reconnected with a high school friend. They would talk on the telephone most evenings and decided to email as well. Mom decided that she needed to become proficient in the use of the computer, and diligently went to computer classes to master email. In so doing, and after more than a year of email and telephone communication she found love again; and at age 84 married Earl James Willie.

Shortly thereafter, Marie left her home of 50 plus years in Boston, Massachusetts, relocated to Kannapolis, North Carolina and became a part of that community without missing a beat.

She joined Marable Memorial A.M.E. Zion Church; was an active member of the missionary society and the Rock of Ages Senior Citizens of Kannapolis.

After 14 years of marriage, Earl James Willie at age 99 passed away.

To be close to family and with the urging of her children, Marie moved back to Boston, Massachusetts. With God’s blessing and into his care and loving arms, Marie passed away at the age of 104. Mom was a kind, caring person that gave of herself, without expecting anything in return. She never had a bad thing to say about anyone.

Marie would like to be remembered as a person of sincere faith, where religious commitment is reflected in the influence that she exerted upon the lives of her family and friends.

Charles St AME Church is inviting you to a scheduled Zoom meeting.