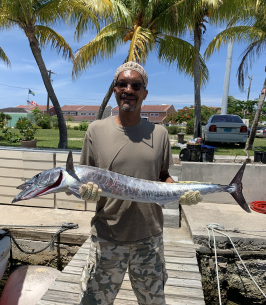 Khalfani Orgi Senghor formerly known as Ronald L. Poindexter, Jr. was born on April 26, 1961, in Chelsea, Massachusetts to Mr. Ronald L. and Marsha (Smith) Poindexter. He would become a life-long resident of Roxbury, MA. He graduated from Cathedral High School in 1979, later furthering his education at Roxbury Community College and UMASS Boston.

In 1983 Khalfani enlisted in the U.S. Army; his military service extended through 1986. He and Amani (Nande) Harris married on July 2, of the same year.

Khalfani dedicated his life to family and Community. In 1993, while employed at the Urban League of Eastern Massachusetts, he created and managed the Young Father’s Program, whose mission was to help young men become better parents saying “We want to take one step at a time and build on it. Self-esteem is first, parenting is last and everything else is in between…. Once we identify the problem, then the guys really responded with amazement….”

In 1994 he continued his service to his community accepting the position of program manager at Youth Build Boston with responsibility for educational and career counseling, and development of life skills for participants.

In his words “TCC’s foremost goal is to foster in children a zeal for academic challenges that is equal to that of athletic competitions. While few will become professional athletes, all possess the potential to become competent students. Our Philosophy is promoting self-confidence through academic and athletic achievement”.

This work marked the beginning of his 25-year commitment to educating and mentoring children. The rest of his professional career was focused on transforming the lives of students he worked with in Boston Public Schools.

Khalfani firmly believed that our position in the 21st Century will rely heavily on the strength and direction of our young people. He was determined to continue his service in building on their strengths and working with people who shared in this belief.

Final disposition will be private.


To Zoom click on your loved one obituary and then click on Photos and Videos Scroll down below picture album then click on Watch Webcasting. Once you sign in we asked that you please mute your device.