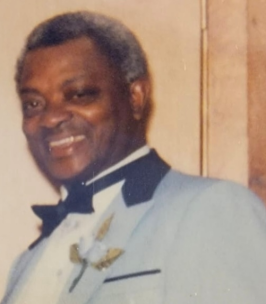 On April 28, 1926, John Benjamin was born to Jessie & Eleanor Weekes in the British West Indies, on the island of Montserrat.

He & Ann married, and together had 2 sons, Kenneth born in Montserrat and Walter in the UK. With his entrepreneurship spirit, John operated a trucking business transporting materials to Ireland. In 1968, while working for the London Transport company, John met a wealthy family from PA, who sponsored him to come to America as their butler & chauffer. John would reunite with Ann & the boys in NY, and later relocate to Boston, MA. He was employed by Stride Rite Shoe Company, & would eventually own & operate 3 Taxi Medallions, which allowed him to hire descendants from Montserrat & others.

John was confident, proud of his BWI heritage, & valued family. He loved to travel & for their 50th wedding anniversary, he & Ann went on a Caribbean cruise. Additionally, he loved the WWF; boxing, specifically Muhammad Ali; western films, especially Bonanza; & watching cricket. Most of all, John loved playing dominos with his friends. When his home basement became too small, he purchased a building on Morton Street known as the “Club House”. On any given day, you could catch up with folks from Montserrat there.

John was predeceased by his sons, Eddie & Kenneth; his granddaughter, Ryan Latoya Weekes; and his siblings, Chris Weekes, Sarah Weekes, Margaret James, & Louise Greenaway. John leaves behind his wife, Ann of 66 years; his son Walter, Sr. (Janice); his brothers, Peter & James; 7 grandchildren; 14 great grandchildren; & a host of nieces, nephews, cousins & friends.
We miss him. We love him. But God loves him best.