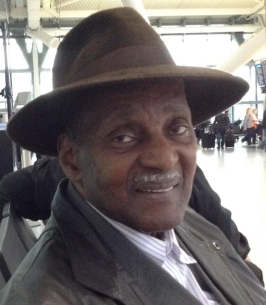 George Henry Davis was born on October 17, 1929, in Victoria Village, on the small island of Montserrat. He is the first of three children and played a parental role to his younger siblings, Nancy and Prince Anthony (Tony Mick). He was well loved by his parents, James and Eliza, who proceeded him in death.

Throughout George’s life, he encountered memorable experiences. He often recounted that becoming a father for the first time had changed his life in various ways. George worked as a carpenter which he held pride in his trade by constructing beautiful pieces of furniture which occupied his time until his desire to travel abroad to see the world and create a better future for himself and his young son, Charles (Dax/Steady).

In the earlier parts of the 1950s, he received an opportunity to travel to the US to work as a farm worker. The job was difficult with cold winters and strenuous work which pushed him to his limits, but above all, he persevered. George then later visited Boston, MA, where he soon met a beautiful gem that he just couldn’t resist, Ms. Gertie Bacon. A few years later they were married and out of that union, they had two daughters Cynthia and Donna. He loved his children very much but was never afraid to take a spanking to their behind. “Spare the rod – spoil the child” was his motto. His goal as a parent was to raise respectful, responsible and well- rounded adults.

His dreams of obtaining all the joys of the world never strayed far from his mind. Working as a mechanic for many years, his knowledge of the trade and his ambition, goals and dreams empowered him to join a business program. By doing so, he eventually became the proud owner of his neighborhood’s Citgo Gas Station in the 1960’s.

George loved life and certainly lived it to its fullest. Traveling was a fondness of his. He often recounted his journeys abroad which included safari rides in Africa, enjoying the sun in Jamaica, adventures in England and many, many more life changing experiences and countries. When speaking his stories, you could hear the excitement and nostalgia and see the passion in his eyes. After many years away, George went back to Montserrat and decided then that every year he’d visit his first love, Montserrat. He would say that these experiences changed his life in various ways and are the ingredients that filled his heart and brought him the greatest joy.

Oh boy, that man loved to dance. The minute he heard a pan knock and a beat of music, he’d be up and on the dance floor. Dancing was his pleasure. Those who knew George knew that he was a no-nonsense person but would help whoever needed a hand. He was one who you could depend on.

Later in his life he married Annie ‘Gertrude’ Davis and they lived happily together until his passing.

The Lord in his infinite wisdom called George Henry Davis home at the young age of 92. He was blessed to leave peacefully with his family at his bed side.