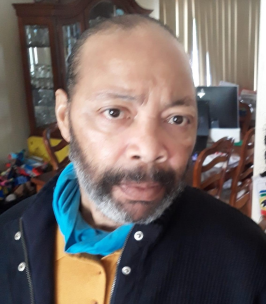 Gene Roosevelt Claiborne, son of the late Reverend Harmon Claiborne and Constance Blick Claiborne was born on October 11, 1953 in Lawrenceville, VA departed this life on October 17, 2022.

He received his education in the public school of Boston Trade Technical High School.

He was employed at Quincy Shipyard as a welder and with the Boston Traffic Department drafting and creating safety signs in the Boston neighborhoods.

He was blessed in this life with 2 beautiful daughters that he loved with all his heart and they were the joy of his life.

Gene excepted Christ in 1968 and became a member of Morning Star Baptist Church under the leadership of Reverend Elijah Gilbert. As a member, he served as part of the first young adult choir and later on in the Morning Star Mass Choir under Bishop John Matthew Borders, III

Gene’s second love was music. At the age of 12 he became a drummer in the Columbia Point Brigadiers Marching Band.

He was a member of several musical groups, the Soul Descendants, the group Fresh with his sister Carolyn and longtime childhood friend the late Michael Smith and Preachers in Concert where one of the joys of his life was singing with his father the late Reverend Harmon Claiborne and his late Uncle George Claiborne and was able to record 2 CD’s with them

Gene enjoyed fishing and playing the guitar and drums.

A longtime partner Helena Williams of Massachusetts and a host of nieces, nephews family and friends.