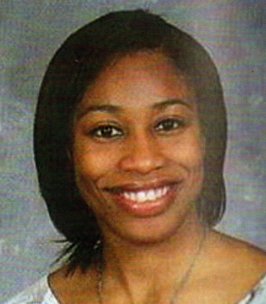 She was 32 years old, born in Boston, MA on January 8th, 1989. She was the daughter of the late Andrea “Dolly” Jackson and her “Dad” Melvin Ledet.

From a young age Chennelle was filled with vibrant energy. She attended Delphi Academy and their summer camp where she learned and developed a passion for Swimming. She was enrolled in Gymnastics, Boston Ballet and Tennis where she excelled. Chennelle joined the swim team at the Dorchester YMCA Tiger Sharks and never looked back. At the age of 14, Nell joined the Flaherty Dolphins and began to swim at a Novice level where she met her chosen brothers Elgernon & Brandon.

After training with Richard Mojica and Brandon, Flaherty Dolphin coaches, Chennelle achieved her goal time in her favorite stroke butterfly, while attending the NBHCSM in North Carolina. She attended Boston Latin Academy and joined their swim team. During the Summer of her Junior year, she embarked on Swimming as a USA swimmer with Bernal’s Gator’s Swim Club. There Chennelle learned along with Elgernon the importance and the detail of stroke technique, endurance, dedication, and the commitment of training for competitive Swimming. Her Swim Team friends & families were all remarkable experiences that Nell loved throughout her life, she was truly a water baby.

Chennelle is a graduate of Simmons College “Now” University, where she majored in graphic design. She joined the Sharks Swim Team and fostered friendships with teammates Hannah & Liz, where they enjoyed training trips annually. While on the team led by coach, Mindy Williams, who she admired, Nell achieved her best time again in the 100 butterfly. Chennelle met her roommate and longtime BFF Brittany “Oby” Campbell, freshman year and they have remained besties. While attending school she worked in graduation. Chennelle remained there until joining John Hancock Investment Management Team as an Admin Asst, where she demonstrated an aptitude for data and Technology. Nell was promoted in a years’ time to the Distribution Operations & Business Intelligence Dept., where she made an indelible mark on Friends and colleagues.

Realizing the challenges and lack of Access to Swimming in the inner-city communities, Chennelle found her passion, teaching children to swim. She began by developing the “BEST” swim team logo. As a USA Coach she was phenomenal in her roles as Swim Instructor, Asst. Coach then Head Coach for Boston Elite Swim Team. During her 12 years with BEST, she touched many lives. Her kind, patience, and compassionate demeanor always won the children over. Nell was one of the few female coaches of color, if not the first in New England Swimming’s LSC. She was vibrant, energetic and had a smile that lit up the room/deck every time she arrived. Her infectious giggle is never to be forgotten. Nell and Elgernon often referred to themselves as Foodies, because of their love of food. Chennelle was small but mighty, and her life was not lived in vain. She impacted the lives of many and made everyone around her a better person.

She encouraged you to celebrate your wins/accomplishments, challenge yourself and always lent a hand to help when you were feeling defeated. The blessing of having her in our lives was knowing her love for family, friends, food, fun and the life skill and sport of swimming!!

In Lieu of flowers please donate to The Chennelle N. Jackson Scholarship via @bestorcas (via Paypal).

Interment will be in Georgia