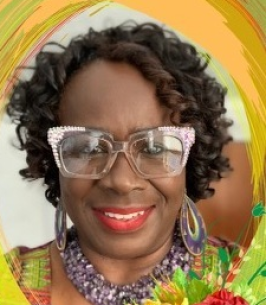 Missionary Charlene Phillips graduated this life with a Double Master's as a Kingdom Humanitarian and Kingdom Servant on March 10, 2022. On April 11, 1960, Charlene was born in Wilmington, NC, to the late Clarence Phillips Sr. and the late Jannie Pearl Phillips Parker.

Charlene gave her life to Christ at an early age and was a faithful member of Mt. Calvary Missionary Baptist Church under the Pastoral Leadership of F.R. Devane and Rev. Chester Reddick. Early in life, Charlene developed a passion for hair and enrolled in Troutman Beauty School to become a licensed Cosmetologist in 1980. She began her career in the hair industry learning from Mrs. Glancy Thomas. It was in this industry, she met and cultivated some of her long-lasting friendships.

Charlene was very skillful when it came to styling hair. Some of her work could be seen on the nightly news worn by Frances Weller, a well-known news anchor and a regular client. In August 1987, she ventured from Wilmington, NC and relocated north to Bridgeport, CT where she lived until August 1989. There she became a member of the Cathedral of the Holy Spirit, formerly the Prayer Tabernacle Church of Love, Inc. under the Pastoral Leadership of Bishop Kenneth H. Moales Sr. before settling in Boston, MA. Charlene found a place where her spirit leaped, and her heart danced at Holy Tabernacle Church under the Pastoral Leadership of Bishop Joe L. Smith and Pastor Arthur F. Jack, where she served faithfully for 33 years.

Charlene recognized a calling to the Ministry of Helps on her life and enrolled in the American Red Cross Nursing Assistant program in January 1990 and became employed by Favorite Nursing in February of that same year. She found so much enjoyment in helping others that when God opened a new door for her at the State Public Health Laboratory Services, also known as the "State Lab," she continued to be a caregiver for those in need on the weekends. Charlene's career at the State Lab spanned over 20 years until she became a fulltime Philanthropist. The acts of kindness and care were undoubtedly in the fiber of her DNA and a considerable part of her kingdom assignment.

Charlene grew up watching her mother's social club feed and provide for the less fortunate families in her hometown of Wilmington several times a year. As a humanitarian whose motto was "feed the people." Charlene spent the last 15 years of her life living out Matthew 25:31-46 via the Holy Tab Food Pantry. This mission to feed the people not only assisted the members of Holy Tab and the Boston community but would transcend finding its way back to her hometown and childhood church. Charlene was a General in service. She did not have time for playing and could often be heard saying, "Work while it is the day, for the night will come when no man can work (John 9:4), and work is what she did to the end. While healthcare and service were an essential part of her being,

Charlene was also an advocate for education. She spent several years of her life heavily involved in the school systems. She served as a member of the education board at Frederick Douglass Charter School and the President of the Parent Council for City on a Hill Charter Public School of Boston and Bennett College of Greensboro, NC, all in which her youngest daughter attended. Charlene loved life, and every waking moment she could get with her daughters, son-in-law, granddaughters, family, and friends. Whether it was by phone, or an in-person visit, her love for her family and friends was evident and admirable. It was this love that led her to birth a family check-in with the descendants of her great-great grandfather Harvey Perkins in 2020 during Covid 19 pandemic. As a woman of great faith and prayer she encouraged the same in her family. It was her mission and utmost desire to see the bondage that once held her family captive be broken through love, prayer, and fellowship.

She also leaves to cherish an adopted brother Michael Wheeler (Lynn, MA), an adopted sister Tracey Haqq (Long Island, NY), and two adopted daughters Keisha McCoy of the city and Maria Gomes. She also leaves many nieces, nephews and a plethora of close friends, and family members of whom she loved dearly.